The Murray Cup will go ahead in 2021, with competition organisers eyeing an early May kick-off and a 14-round competition.

Murray Cup manager, Bill Bell, has been in talks with NSW Rugby League, and with a meeting scheduled for this week, they hope to announce the official date and draw as early as next week.

“I’ve spoken to Dean Sutherland from NSWRL and we have a meeting next week, so we are going to organise the league AGM (Annual General Meeting) first, then we will organise the start date,” Bell said.

“He (Dean Sutherland) is putting a draw together and we hope to have that organised next week.”

A 14-round competition isn’t set in stone, but Bell believes it is the fairest and easiest outcome.

“We would like it to be that way, that way we can play each other twice and have a couple of byes in the season,” Bell said.

While other competitions are planning to kick off in early April, Bell said a May kick off made more sense.

“There is no point starting in April with ANZAC Day, the school holidays and Easter, so we thought we would start in May and bypass all of that,” Bell said.

Bell was pleased to see Tumbarumba keen to play, after the club won the 2019 tackle and leaguetag competitions.

“It’s great to see them involved, especially after the year they had with the fires, then Covid affecting everyone,” Bell said.

“They copped it really hard last year and it is good to see them bouncing back and getting back to playing.”

The Murray Cup competition didn’t go ahead in 2020, with the impacts of the Covid-19 pandemic too much on the cross-border competition, and Bell hopes there is a thirst for community sport, and especially rugby league.

“Last year, with the way everything fell through, hopefully everyone realises what sporting clubs mean to communities, and what they can offer a community,” Bell said.

“They get people together, it’s good for fitness and helps with mental health and with the absence of sports last year, hopefully people are keen to get behind clubs and back involved in the Murray Cup.”

Seven teams, including the Wodonga Wombats, Wodonga Storm, Corowa Cougars. Benalla Wolf Pack, CSU Mud Dogs and Tumbarumba Greens have put their hand up to contest the 2021 competition, with only the Murray River Warriors not playing this season.

“All the sides are in, the only side that will be missing from previous years is the Murray River Warriors,” Bell said.

Bell said his biggest focus, apart from getting a viable competition off the ground in 2021, was strengthening the competition that effectively runs side-by-side with Group 9.

“You need a stepping stone league for these players, and give them the opportunity to step up to that bigger comp, and we have that potential to be that stepping stone and have some really good footy,” Bell said.

One way in which the competition hopes to grow their stature is by fostering representative rugby league, and their annual State Of Mind Cup against the Proten Cup competition.

“We are hoping to try and bring that back this year and have another round against the Proten Cup, while still raising awareness for mental health,” Bell said. Greens still in the hunt 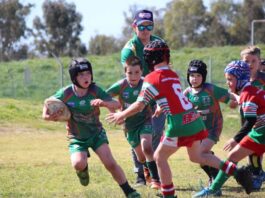