In good news for rugby league players and supporters in Tumbarumba, the Murray Cup has been given the green light to proceed by NSWRL and NRL Victorian officials.

A six team, 10-round competition, consisting of two sides from Wodonga, and teams from Benalla, Corowa and Wangaratta and Tumbarumba, will get underway on Sunday, with the Greens on the road when travelling to face the Wodonga Storm.

After missing out on playing in 2020 due to the Covid-19 pandemic, competition organisers were forced to push back the 2021 Murray Cup start date by two weeks due to a referee shortage, which prompted players and clubs to think the worst.

Since then, NSWRL League and Club Support Coordinator Dean Sutherland has assured the Tumbarumba Times that this isn’t a problem anymore, with the Murray Cup kick-off and draw set in stone.

“The initial problem was the availability of referees; this has since been rectified,” Sutherland said.

Sutherland explained that numbers were good, with 55 players registered across NSW clubs Tumbarumba and Corowa. He said that at the end of the day, he was just happy to have the Murray Cup going ahead in 2021.

Greens Secretary, Nathan Hammond, said no official coach had been named to lead the side, but a group of senior players would be led by Jake Goldspink.

“They really haven’t got a coach yet. Jake Goldspink will basically do it and we will all help out where we can,” Hammond said.

A Tumbarumba side that contested the Tumut Pub 9s has been training in anticipation for the competition.

“We have been training since the 9s,” Hammond said.

“It’s a bit of a gap now, but the 9s was our preseason, and normally we play a month or so afterwards, so it’s been a bit longer this time.

“Most of the guys that played in the 9s that don’t play in Group 9 will play – we have about 20 registered.”

The Greens are the defending premiers, winning the Murray Cup competition in 2019 when going through undefeated, and while Tumbarumba shape as the favourites to go back-to-back in 2021, Hammond expected a tougher time of things this time round.

“I wouldn’t say there is a heap of confidence, but we should go okay,” Hammond said.

“My understanding is that most of the teams have recruited a little bit, and I expect the competition to be a lot stronger, which is good for those teams and good for the comp.”

Two senior players won’t return this year, and according to Hammond the Greens will have to make do.

“There is a few not playing. Steven Arnold is not playing this year, and Peely (Shane Peel) won’t play all the time,” Hammond said.

Unfortunately, the Greens leaguetag team, which are also the reigning Murray Cup premiers, won’t play in 2021.

“There are just no numbers. Maddy (McPherson) was the driving force and she has headed up north,” Hammond said.

“There is just that gap, we have a team in the 16s in Minor League and you would like to think that they will come through after that, so we should have a team next year.”

With the season nearing closer, players are urged to make training this week, with the Greens training tonight from 6pm and Friday night from 6.30pm.

June 6: Round 4 v Wangaratta Knights (A) 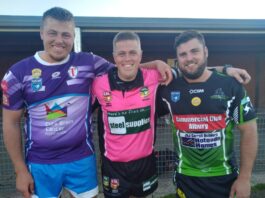 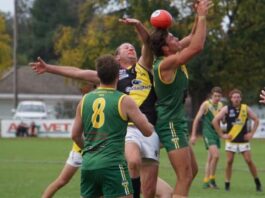